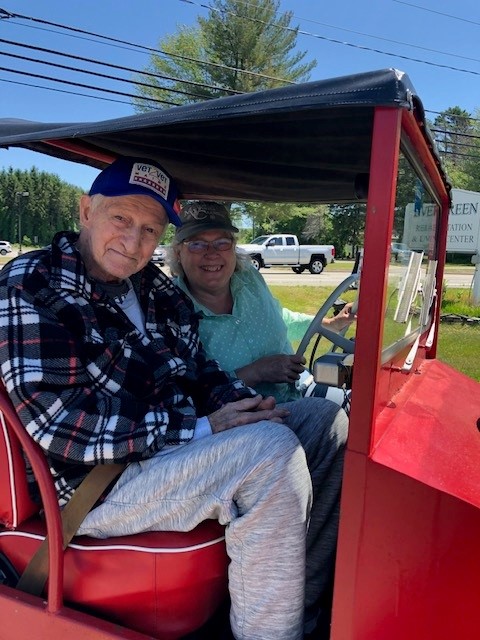 The Berwick Car show cruises into Sullivan Square on Sunday, June 5th (rain date Sunday, June 12th) and if past shows are any indication, it will be a record setter! Now in its 10th year, this annual event, hosted by the members and auxiliary of Charles S. Hatch American Legion Post #79, will once again bring good food, great music and lots to see to our fabled hometown square. Dozens of entrants in multiple categories and year groups have already signed up to take part in this year’s show and include a wide range of cars, trucks, motorcycles, and customs.

This year’s featured car is a real stand-out with a storied history in the local community. It begins with a man named Vernon F. Heustis, born in 1927 in Bristol, Rhode Island. Like many people of this era, Vern was drafted into the Army where he trained to be a radio operator. Upon returning home, this stalwart veteran completed his bachelor's degree in Mechanical Engineering through the GI bill and raised a family of 5 (4 girls and a boy) in Bristol. Vern worked as a draftsman/designer in his father’s machine shop, J.F. Huestis, Inc. where he designed one-of-a-kind machines or made adjustments to improve machine processes (orange peeling machines, gold ball winding machines, etc.). Boxes of “test runs” often came home with Vern for the eager kids!

Vern made a camper by gutting and retrofitting a Beck bus and he also built this year’s featured car: a dune buggy (sportster?) from a plan in Popular Mechanics. Vern bought a 1962 Volkswagen Beetle that had been in a rollover and was off and running. The crew at his dad’s machine shop joined in the fun, especially the welder! All Vern’s kids learned to drive a standard in that car on the back roads of Maine where the family settled after Vern’s Dad sold his business.

Following 26 years working for John Floyd Heustis, Vern went to work for Corning/Components in Biddeford, commuting from Berwick. In 2003, when Corning/Components sold, Vernon decided to retire after 25 years, and he and second wife Theresa spent their retirement traveling the U.S. highways and byways. Vern now lives in the Scarborough Veterans home where he sees lots of friends (lifelong pal Art Dennison and Vet 2 Vet friend Eric Small just had their 400th visit with Vern!) children and grandchildren.  What do you want to bet that they spent some of that quality time together reminiscing about building and learning to drive in that 62 sportster!?

So come on over to the Berwick Car Show this Sunday for this family-oriented event. Grab something to eat and drink while enjoying music that will take you down memory lane. Check out the classics and talk with the owners as they compete for best in show/best in class. You’ll be glad you did (proceeds to benefit area veterans and their families).

“WHERE HEROES LIVE ON FOREVER”

His name is Eddie and although he might not readily admit it, he was family oriented and loved spending time with his brother and six sisters when he was growing up. Most especially, he loved playing toy cars with his sister Suzanne, who adored him. The two things Eddie was most passionate about were his family and his country, so no one was surprised when he left Maine and joined the military.

Edward Leonard Mann, Jr., was barely out of his teenage years when he enlisted in the U.S. Marine Corps on April 12th, 1966. After a brief assignment stateside, he was reassigned and arrived in Vietnam in November 1967.

On April 30th, 1968, under increasing enemy fire, Mann’s team was ordered to retreat. Eddie stayed behind to provide cover for his fellow marines. Although everyone else on Mann’s team survived the battle, his final communication was “This is Eddie, signing out.”   The young, heroic nineteen-year old’s actions saved countless lives that day.

On a recent Sunday under clearing skies, Eddie Mann’s life and legacy was honored and celebrated with a special presentation to Eddie’s sister Suzanne, courtesy of Ms. Kiana Goodwin and the Til Valhalla Project. After extensive research, Kiana applied for a plaque from the project, founded by Rhode Island native and Marine Corps veteran Korey Shaffer. The event was hosted at the Berwick home of Chuck and Pam Bogdan, highlighted by a 21-gun salute by the Charles S. Hatch Post #79 Honor Guard, followed by the mournful sound of the bugle call “Taps”.

In addition to the plaque bearing a photo of her brother and details of his heroism, Suzanne was presented with a certificate signed by Korey Shaffer and three metal memorial bands bearing Eddie’s name, rank, and unit. Lance Corporal Mann’s exploits have also been added to the Til Valhalla Project’s Wall of Heroes where his face and name will be seen every day by someone new.

Through the Til Valhalla project, our nation’s fallen heroes are forever honored with contributions also made to #Mission 22 to fight the war against veteran suicide. Kiana Goodwin’s special gift to Suzanne ensures that her brother Eddie will never be forgotten and will live on forever. Semper Fi Eddie. Til Valhalla.

Originating from Norse mythology, Til Valhalla is abbreviated from “until Valhalla. It is said among service members to mean “until we meet again in Valhalla.”  More information can be found at: https://tilvalhallaproject.com/

As another Memorial Day passes, our thoughts should turn to the 341 Maine residents who lost their lives fighting in Vietnam and to all those who gave all in conflicts before and since. Freedom, as they say, is not free. All gave some, some gave all. May they all live on forever.